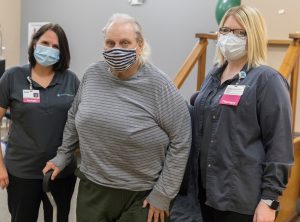 Thanks to associate donations, Jim is back on his feet.

Jim Hylton is taking life one step at a time and counts each of those steps as a victory.

After being bedridden for more than three years, Jim is back on his feet thanks to associate gifts to the Mercy Health — North Ridgeville Outpatient Rehabilitation and Therapy.

In 2016, Jim weighed 490 pounds when his hip gave out, but because of his health condition he wasn’t able have the surgery needed to fix it. He knew it was time for a change. He had bariatric surgery which helped him get his weight down to 270 pounds and ready to get back on the move.

“I had the hip surgery in November 2019, and about 5 months later was finally able to take my first steps in years,” he said. “I have been working really hard to get this done, but I wouldn’t have been able to do it without the help of the therapists.”

All his hard work is starting to pay off. In December he was able to take a few steps unassisted and now has a goal of being able to leave his walker behind completely.