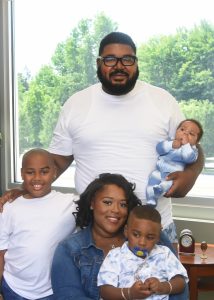 When the Johnson Family was expecting their first son, father-to-be Brandan was just out of school and working hard to make ends meet for his growing family. Brandan knew he wanted to be the best father he could be.

Through an internet search, he was connected to the Mercy Health Fatherhood Support program. Funded with your generous donations, the program provides mentorship, support and education to fathers.

It was just what Brandan was looking for. They even helped provide necessities like baby furniture, diapers and infant care needs, which Brandan says were a huge help to his family.

“At the time, there were a lot of things that were given to us that I probably would have struggled to have gotten,” he says. “I was slaving away barely affording things and the program actually helped me a lot.”

During fatherhood support classes and discussions, Brandan and his fellow fathers talked about communication with children, discipline, educational and developmental milestones and healthy eating habits.

Brandan was surprised how much time was spent on building good communication habits with spouses.

“I never thought about how important that was, so in general your child can have a happy home,” he says.

When the family suffered a house fire, Brandan said that the fatherhood support team stepped in to help them get back on feet and provide for their children. He is very thankful that your donations have made the program possible for him and his family, now blessed with three children.

“I really appreciate everything the program has done,” he says.